In Part 1 of Sunlight & Oxygen I explained the usefulness of sunlight as a laundry cleaning agent. In Part 2, I’m going to reveal how “oxygen” is a greenie’s secret laundry weapon too.

Well, okay, I’m being a bit disingenuous, it isn’t quite oxygen … but oxygen bleach. If you’re like me, you want the absolutely laziest method to get rid of stains. You don’t want to have to deal with the stain straight away, you don’t want to fuss with scrubbing or applying tea tree to this stain or making a paste of bicarb and lemon for that stain. Well you can be a greenie and eat your cake too, because oxygen bleach is an easy way to soak your stains away and it is still environmentally friendly.

As I explained in Part 1, the first stage of my stain treatment process is to wash as normal, and dry in the sun. If sunlight hasn’t removed the stain then oxygen bleach is the all-round solution I turn to next. I only have a few exceptions to this process.

What is Oxygen Bleach?

Oxygen bleach is the common name for Sodium Percarbonate. You will find it sold under both names. It is the major ingredient in many laundry soaking products as an oxidising agent (bleach). It also seems to be used for sterilising equipment in beer making, and as a laboratory source of hydrogen peroxide.

Hydrogen peroxide and washing soda are both useful for cleaning and stain removal.

Why is it green?

Here are some risk assessments of the use of sodium percarbonate in laundry products for further reading: http://www.heraproject.com/ & http://www.inchem.org/

Most commercial stain removers, like Vanish, rely on sodium percarbonate as one of the main ingredients. However, these products are usually a mixture of ingredients, not necessarily all as benign to the environment as sodium percarbonate. For one, laundry products usually contain surfactants, which will be derived from either petroleum or palm oil. They also contain optical brighteners, enzymes, bleach activators and other chemicals. While these mixtures are formulated for maximum effectiveness and gentleness on your clothes, I have not found sodium percarbonate to be any less effective. In fact, I’ve usually been amazed at the results (and quite smug too).

Sodium percarbonate is also the main ingredient in environmentally friendly stain soakers, but why pay the mark-up for a mixture of ingredients with varying effectiveness when you can buy pure sodium percarbonate? And most of these cleaners will still be made with palm oil.

What types of stains can I use Sodium Percarbonate for?

I have found sodium percarbonate to be amazingly versatile. It has worked for me on:

My research indicates that it should work on any organic stain, including:

I have not found it useful for particulate stains, like ground-in dirt on the knees and bottoms of toddler clothes.

Some of the mould visible on the pink & white fabric. 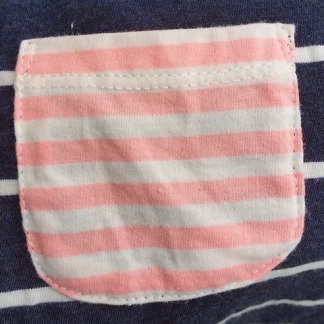 In some cases hydrogen peroxide will be the ingredient actively removing the stain, and washing soda will be in others. Washing soda is a water softener, which increases the ability of soaps to remove oil in hard water, but is an effective degreaser in its own right. It is generally considered a good cleaner and deoderiser for dirt, grease and soap scum. Hydrogen peroxide is a bleach, as well as disinfectant. This mixture is especially good for food stains which can be a mixture of oils, fats and strong colours.

Hydrogen peroxide is also claimed to kill mould and mildew (rather than just bleaching the mould stains) but I haven’t found a source beyond doubt on this point. I’m willing to accept it’s veracity as I’ve had such good success with removing mouldy smells from poorly dried fabrics, but if you are concerned then it’s best to use clove oil or vinegar before soaking in sodium percarbonate.

The occasions when I prefer to use a different method to sodium percarbonate are:

Sodium percarbonate can be used in many ways, but as a pre-soak or stain-removal soak after washing:

I usually start with 1/2 cup and repeat if I can see that sodium percarbonate is making a difference, but hasn’t removed all the stain.

Some points to note:

Where do I buy sodium percarbonate?

Beer Belly is the cheapest source of sodium percarbonate that I have found ($5/kg).

It’s usually much more expensive when sold as an environmentally friendly cleaning product.

So there ends my essays on Sunlight and Oxygen! I hope that I’ve opened your eyes to some green cleaning solutions that you weren’t aware of, and busted the myth that green cleaning is finicky and requires a whole lot of extra work. Want to eat some cake with me?

I am an engineer, a wife and mother of two small children living in Perth, Australia. Green Rambles is where I share some of my interests and knowledge I’ve learned in my journey towards a more sustainable lifestyle, and improving myself as a person and a parent. I hope to share information that other people might find enlightening and helpful in their own lives.